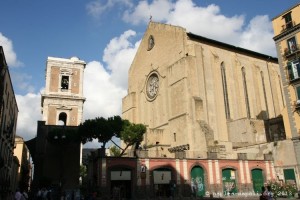 The Basilica of Santa Chiara, the largest Gothic church in Naples, with the adjoining monastery, was built between 1310 and 1328 by Robert of Anjou, on Roman baths of the first century AD, near the west wall of the city.
Located in the Piazza del Gesù Nuovo in front of the Church of Jesus it was included in the convent of the Poor Clares adjacent.

Several tombs of the Angevins are sheltered, including those of Charles of Calabria and Robert the Wise.

Santa Chiara was built under Robert of Anjou and his wife Sancha de Mallorca, by the architect Gagliardo Primario, in a Provencal Gothic style.

On August 14, 1571, Don Juan of Austria received the papal banner from Pope Pius V and the leadership of the Christian coalition forming the fleet of the Holy League which left for the battle of Lepanto to confront the Ottoman Turks, they were heavily discomfited during of one of the greatest naval battles in history.
An important baroque reconstruction took place between 1742 and 1796, and the interior decorated.
The Allied bombing of 4 August 1943 set the building on fire, destroying most of the interior, including all the frescoes of the 18th century.

The entrance on Via Benedetto Croce is made of a large 14th century Gothic portal. The double slope facade is preceded by a portico with three pointed arches.
To the left of the church, stands the bell tower of the fourteenth century, later restored in a Baroque style.

The basilica is 130 meters long and 45 meters high.
In the 18th century the Gothic aspect was concealed by baroque decorations.
The interior, of a single rectangular nave, without frills and without transept, counts ten lateral chapels. On the back wall is the tomb of Robert of Anjou, work of the Florentines Giovanni and Pacio Bertini, and its sides, those of the eldest son Charles, Duke of Calabria and Mary of Valois, both made by Tino di Camaino , as well as the tomb of Mary of Durazzo.
There are also the tomb of Antonio Penna, and the tomb of Agnès and Clemence di Durazzo.

The tombs of the chapels, built between the fourteenth and seventeenth century, belong to the characters of noble Neapolitan families.
At the entrance, just to the left, the tomb of Salvo D’Acquisto; In the third chapel, the sarcophagi of Del Balzo; in the sixth, two bas-reliefs of the fourteenth century, including the martyrdom of Maxentius’s wife, in the seventh chapel, the tomb of Louis of Durazzo (fourteenth century, by Pacio Bertini).
In the ninth chapel, on the eastern side, which has retained its Baroque structure, rest the Bourbon, including the kings of the Two Sicilies, Ferdinand I and Francis II.

To the right of the choir is the sacristy with Baroque frescoes, and in an adjacent room is an embroidered 17th century cloth. Further on a closed staircase to the public leads to the convent and a Gothic portal gives access to the “Choir of the nuns.”
On the walls of the interior, Giotto‘s scenes of the New Testament and Apocalypse were almost entirely lost during Baroque restoration and Allied bombing. 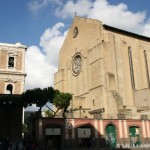 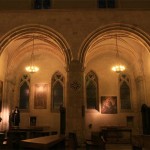 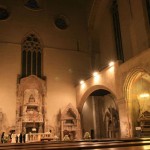 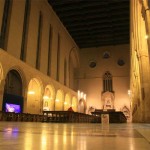 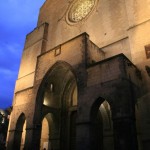 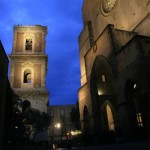 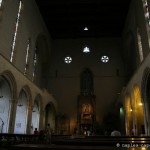