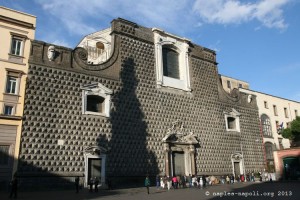 The Church of Gesù Nuovo (New Jesus) or Great Trinity is one of Naples’ most important basilicas, so named to distinguish it from the old church of Jesus. It was originally a 15th century palace.

Originally it was a palace, built in 1470 by the Prince of Salerno Roberto Sanseverino. Palace Sanseverino was later confiscated from the family by the Aragonese, before being returned thereafter.

Under Ferrante and Isabelle Sanseverino the palace became famous for the beauty of its interior, with its rooms decorated with frescoes or its beautiful garden, becoming an example of the Renaissance and Baroque Neapolitan.
In attempting to oppose to the installation of the Inquisition in Naples by the Spanishs, Ferrante supported a popular rebellion and in 1552 the Spaniards exiled him and confiscated his property.

In 1584 Philip II sold the palace to the Jesuits. They rebuilt the entire building with the brothers Giuseppe and Pietro Valeriano Provedi, to the point that only survived the diamond stone facade and the Renaissance marble portal. The consecration of the church took place on October 7, 1601.

The dome was completed in 1634 and in 1636 Giovanni Lanfranco painted there a Paradise. In 1688 the dome collapsed in an earthquake.

At the end of the 17th century, the dome was rebuilt by Guglielmelli. The portal was embellished and in 1717 the structure was consolidated by Ferdinando Fuga. Paolo de Matteis paints the new dome with a Glory of the Virgin.

In 1767, after the Jesuits were banished from the Kingdom of Naples, the church was transferred to the Franciscan Reform, but in 1774 the dome collapsed again in part. In 1786, the engineer Ignazio di Nardo replaced the dome with a false dome, a crushed dome (bowl-shaped) painted with a coffered perspective.

In 1804, the Jesuits were again admitted to the kingdom, before being expelled again under the French occupation from 1806 to 1814. After the return of the Bourbons, the church was returned to the Society of Jesus in 1821. These ones were again expelled in the mid-nineteenth century. In 1900, the order of the Jesuits was reintroduced and they remained there until now.

The church was badly damaged during the Second World War due to air strikes. One of the bombs crossed the ceiling of the nave without exploding. it is now exposed in the church.

The facade of Palazzo Sanseverino has become the facade of the church. It is characterized by its structure in small pyramids or diamonds in piperno stone, a volcanic rock, which was a style usually used by the Venetian Renaissance but totally unknown in the south of the peninsula. Strange marks were engraved by Neapolitan sculptors or masons on certain faces of the diamond stones.

The marble door, from the original Palace, dates from the early fourteenth century. In 1685, the Jesuits made modifications, with bas-reliefs, the frieze and the upper cornice, the addition of two lateral columns, etc. 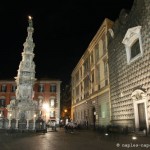 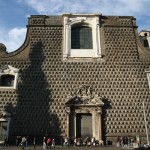 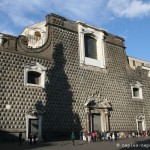 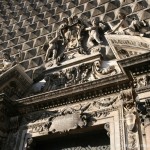 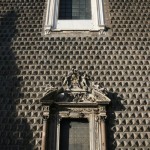 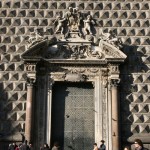 In Naples, during the Renaissance, at some stonecutters were attributed the power to charge stones with positive energy to repel bad negative energies. This is what was attributed to the strange signs engraved on the sides of the pyramidal stones, the legend of which relates that they transmit all the positive and benevolent forces from the outside to the inside of the building.
By incompetence or malevolence of the authors, these stones are not correctly marked, and the effect produced would then be the opposite: all the positive magnetism is transported outside the building, thus attracting all sorts of misfortunes on the site.
This would be the reason why, over the centuries, disasters have struck this place: the confiscation of Sanseverino property, the destruction of the building, the fire of the church, the repeated collapse of the dome, the Jesuits regularly hunted, …

However, in 2010, the art historian Vincenzo de Pasquale and the Hungarian musicologists Dors Csar and Lorant Réz identified the engravings as Aramaic characters, notes of a musical score composed on the facade of the church, read from right to left and from bottom to top. It is a concerto for string instruments to which the researchers gave the title of Enigma.

Description of the interior

The baroque interior in the shape of a Greek cross is richly decorated with marbles by Fanzago, made in 1630. Frescoes by Francesco Solimena decorate the nave, and vaulted ceilings were painted by Belisario Corenzio and Paolo De Matteis, representing biblical stories, saints and Jesus.

At the back of the façade is the Expulsion of Heliodorus of the Temple (1725), a baroque masterpiece by Francesco Solimena

The frescoes of the transept of St. Ignatius Loyola and St. Francis Xavier were realized by Belisario Corenzio and repainted by Paolo De Matteis.

The dome, rebuilt by Ignazio di Nardo and reinforced by a reinforced concrete structure, has a spherical cap pierced with windows in spectacles. Beside the stucco decorations are the remains of Giovanni Lanfranco‘s frescoes from the early 17th century. This one is also the author of the frescoes of the four evangelists which decorate the four pillars supporting the dome. 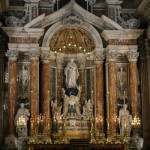 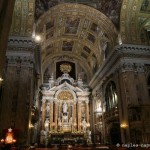 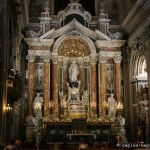 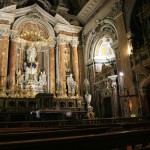 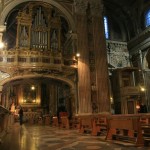 The apse and the transept

Around the altar are three bronze bas-reliefs on a black marble base: the Emmaus dinner, the promise of the Eucharist in Capernaum, and in the middle a reproduction of the Last Supper by Leonardo da Vinci. Above the altar, eight busts of saints glorify the Eucharist.

The apse was built at the turn of the 17th and 18th centuries.

The transept on the left side presents paintings by Jusepe de Ribera (Glory of St. Ignatius, and Pope Paul III), sculptures by Cosimo Fanzago, frescoes by Paolo De Matteis and Belisario Corenzio, among others. On the right side of the transept, a door leads to Giuseppe Moscati‘s former private rooms, where personal items are displayed.

The chapel of the Visitation has an altarpiece of Massimo Stanzione and under the altar is a bronze urn containing the remains of St. Joseph Moscati (1880-1927), professor of biochemistry at the University of Naples, canonized in 1997 by the Pope John Paul II.

In the chapel of St. Francis Xavier, the altarpiece shows the saint receiving a vision of the Virgin Mary. On the upper part, three murals are of Luca Giordano, the vault painted by Corenzio and De Matteis represent episodes of the life of the saint.

The painting placed in the chapel of St. Francis Borgia (1510-1572) is attributed to Sebastiano Conca.

At the end of the right aisle, the Chapel of the Sacred Heart has frescoes by Belisario Corenzio. The painting representing the Trinity, from Guercin, is now placed on one side of the chapel of St. Ignace.

The Chapel of the Nativity counts an altarpiece of Girolamo Imparato.

In the chapel of St. Ignatius of Loyola, the statues of David and Jeremiah are by Cosimo Fanzago. Ribera‘s paintings depict episodes from the saint’s life. The vault bears frescos of the life of Saint Ignatius of De Matteis. The prince of Venosa, Carlo Gesualdo, famous composer and murderer of his wife and his lover, is buried in front.

The Chapel of the Crucifix has a wooden crucifix, with the Virgin and Saint John, carved by Francesco Mollica. The ceiling frescoes with the story of Christ were painted by Benaschi.
The two imposing reliquaries with 70 busts of martyred saint, in gilded wood, were made in 1617 by the Neapolitan sculptor Giovan Battista Gallone.