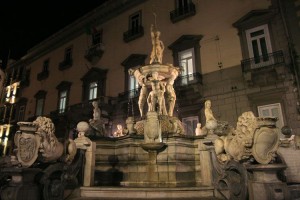 The fountain of Neptune dates back to the time of the Viceroyalty of Enrico de Guzman, Count of Olivares (1595-1599), directed by Giovanni Domenico D’Auria, on a design by Domenico Fontana.
First built and installed at the port arsenal, in 1629 it is transported near the Royal Palace, then shortly after the Egg Castle, where it was enriched with sculptures of Cosimo Fanzago. In 1638, it moved to via Medina. Damaged during the revolt of Masaniello (1647), then looted by Viceroy Pedro Antonio of Aragon (1672), it was restored in 1675 and installed near the Grand Molo.

In 1886, during a major reconstruction of Naples, it was deposited in the caves of Pizzofalcone, then placed in 1898 on the Stock Exchange (current Piazza Bovio). In 2000, during the construction of the metro, it took position in via Medina.
The fountain should take place in front of the Town Hall.

With a circular shape, the fountain is surrounded by a balustrade with four stands. Between the legs of the lions are seen the city coat of arms and that of the Duke of Medina and Carafa (from Cosimo Fanzago).
Two sea monsters pour water into the central basin below, adorned with dolphins. The newts who spit water in turn are the work of Pietro Bernini.
In the center of the fountain, on a rock, two nymphs and satyrs under a statue of Neptune with the trident (by Michelangelo Naccherino). 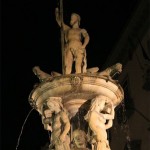 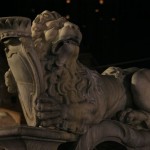 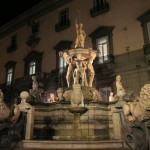 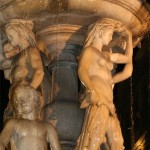 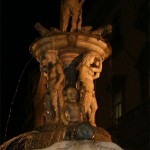