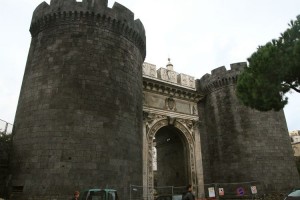 Important historical crossroads of the city, located towards the direction of the city of Capua, the Porta Capuana (Capuana Gate) which is near the Castel Capuano of Naples was built in 1484 by King Ferrante of Aragon.

Its construction was part of a re-fortification of Naples by the Aragonese rulers. Only the door has been substantially preserved. There, the activity has always been intense, with a cosmopolitan mix often noticed by nineteenth-century writers.

In 1656, was erected a large niche with a fresco painted by Mattia Preti representing the Archangel Saint Michael and Saints Gennaro, Lamb and Rocco, praying the Virgin Mary to save the people from the plague.
Upon his arrival in Naples, Preti had killed a sentinel to pass the sanitary security, fact for which the authorities condemned him to death. To escape, the artist offered to paint all the doors of the city free of charge with images of the saints who liberated Naples from the plague.
Later restorations erased the painting.

It consists of a white marble arch richly decorated with bas-reliefs, flanked by two towers (symbolizing honor and virtue). This Renaissance work, was commissioned to the architect Giuliano da Majano.
In the center of the door is the coat of arms of Charles V, dating from 1535, engraved on the occasion of the visit of the monarch of the city (replacing a bas-relief representing the coronation of Ferdinand)

Other towers are present in the adjacent streets, as well as remains of the wall, to the north, until to the Gate San Gennaro, near the current Piazza Cavour.

Near this door is the church of Santa Caterina in Formiello, a fine example of the Renaissance monument in Naples. 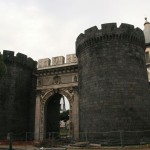 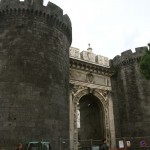 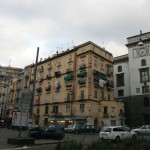 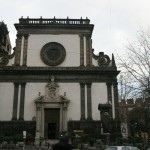