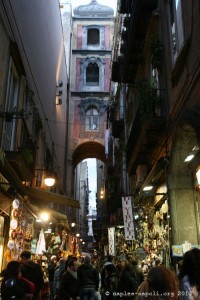 The church of San Gregorio Armeno, with its monastery, is also known as St. Patrick‘s Church. It is located in the historic center of Naples, in a street known for its shops of creches and craftsmen of sacred art.

In this street, the old Nostriana road, the Bishop Saint Gregory founded the first hospital for the poor in the 5th century. The church was erected on the ruins of the Temple of Ceres, where the legend attributes the foundation of the monastery by Empress Helen, mother of the Emperor Constantine.

There was probably a monastery of nuns Basilians, disciples of St. Patrick, which housed the relics of St. Gregory of Armenia (who was Patriarch of Armenia 257-331).

In the 16th and 17th century the complex was renovated.

Since 1864, the remains of St. Patrizia were transferred into the church (in a reliquary of the fifth chapel on the right). A descendant of Emperor Constantine, she was reported to have been wrecked on the coast of the city in the fourth century, and housed in the former Basilian convent, where she died on August 13, 365. The miraculous liquefaction of her blood would have traditionally taken place on St. Patrick’s Day, August 25th.

The façade has four Tuscan pillars. The atrium, severe and dark, supports the floor of the choir.

The interior of a single nave with four side chapels, ends with a rectangular apse, topped by a half-dome decorated to the glory of St. Gregory of Luca Giordano.

The coffered ceiling is a masterpiece made in 1580 by the Flemish painter Teodoro d’Errico, whose squares contain golden sculptures representing the life of the saints whose relics are kept in the convent.

Among the chapels, there are those of the Annunciation, of Pacecco De Rosa, and the Virgin of the Rosary by Nicola Malinconico, and remarkable frescoes by Francesco Di Maria.