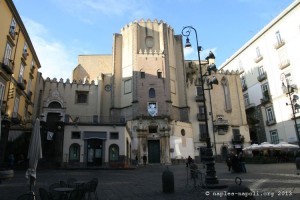 Piazza San Domenico (Saint Dominic square) is one of the most important squares of Naples, located along the decuman, the Spaccanapoli, an ancient city road that cuts it from east to west, right in the historic center. It’s a pedestrian zone today. Via Mezzocannone crosses it from north to south.

In the square are the church and the homonymous obelisk.

Historically, it corresponds to the eastern boundary of the Greek walls of Neapolis, built by Alfonso I of Naples, including the grand staircase near the apse of the church of San Domenico Maggiore.
It is surrounded by palaces, and the basilica is one of the most important churches of the city, whose facade is of a marked oriental style.

The obelisk in the center of the square, by Francesco Antonio Picchiatti, was erected by the Neapolitans in thanks for escaping an epidemic of plague.

Among the buildings that surround the square is the 15th-century Palazzo Petrucci, rebuilt after the 1688 earthquake, with the marble gate and portico remaining. The Palazzo di Saluzzo Corigliano, built at the beginning of the 16th century, today part of the “Eastern” University of Naples, has a rococo interior in excellent condition and a large hall with remains of Greco-Roman structures. The Palazzo di Sangro of Casacalenda started in 1766 and finished by Luigi Vanvitelli presents a gallery of frescoes by Fedele Fischetti and a courtyard with Doric columns.

Nearby, towards the Nile Square, the church of Sant’Angelo a Nilo houses the tomb of Cardinal Brancacci sculpted by Donatello and Michelozzo; the palace Carafa della Spina, late 16th century and renovated in the 17th century has a beautiful portal. The palace of the family of the princes of San Severo, near the chapel of the same name houses some of the most important marble sculptures of the eighteenth of the Kingdom of Naples. 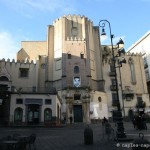 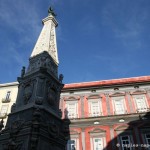 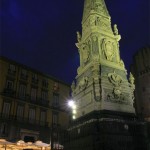 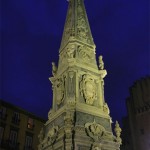