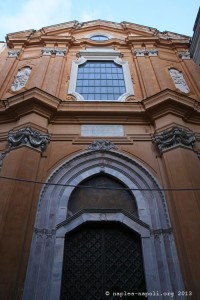 San Lorenzo Maggiore is one of the oldest basilicas in Naples, located on the site of the ancient Greek agora and the Roman forum, on the ancient way decumanus maximus, in the historic center.
Dating back to the 13th century, its interior has retained its Gothic style.

Pope Gregory IX decided in 1235 to erect a church dedicated to St. Lawrence. It is the so-called Foro church (Paleochristian era) which was attributed to the Franciscans.
Charles I of Anjou, shortly after his victory over Manfred at the battle of Benevento, around 1270, supported the reconstruction of the basilica and the convent, in a mixture of French Gothic and Franciscan styles.
The apse, unique in its kind in southern Italy, is an example of French Gothic. While towards the transept, the Gothic becomes Italian, sign of the evolution of the builders.

In the centuries that followed and experienced earthquakes, the basilica was often refitted, and from the 16th century, heavy Baroque decorations were inserted. Between the end of the nineteenth and the second half of the twentieth century, baroque ornamentation was removed with a few exceptions such as the facade of Ferdinando Sanfelice and the two chapels of Cosimo Fanzago.

The San Lorenzo Museum occupies the three floors above the courtyard; it is dedicated to the history of the San Lorenzo church and that of the region since antiquity.

Under the San Lorenzo church, there is almost half of a covered market of Roman origin. It is the only large-scale Greco-Roman site that has been excavated in the city center of Naples.

Description of the church

The Gothic portal of the facade still keeps the wooden door of the fourteenth century. The Baroque façade of San Felice dates back to 1742.

The interesting 15th century bell tower, several times rebuilt, has a square tower. Because of its location in the city center, it was repeatedly the site of historical events, assaults and seats.

The interior of the church consists of a nave framed by chapels. On the right side is the tomb of Ludovico Aldomorisco (1421), advisor to King Ladislas of Durazzo.

In a chapel on the left, Marco Pino‘s Adoration of the Magi, created in the mid-16th century, was originally intended for the ancient church of Jesus.

On the left side of the transept, the chapel Saint-Antoine is a majestic work of Cosimo Fanzago (1638). There was the famous painting of Simone Martini, Saint Louis of Toulouse crowning his brother Robert of Anjou (now in the museum of Capodimonte).

In the transept are various frescos dating back to the origins of the church: those of the fourteenth century from Montano d’Arezzo and others. Also, the tombstone of Charles de Duras, put to death in 1348 by King Louis of Hungary (the date inscribed, 1347, is erroneous)

The apse, the arches of the ambulatory and its radiant chapels are of a typically French Gothic style. There is the tomb of Catherine of Austria, first wife of Duke Charles of Calabria, and first sculpture of the Neapolitan Tino Camaino.

The high altar, work of the Renaissance was carved by Giovanni da Nola. At the top of the statues of saints: Laurent, Antoine and François. On the lower part: the martyrdom of Saint-Laurent, Saint-François and the wolf of Gubbio and Saint Antoine talking to fish. 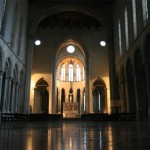 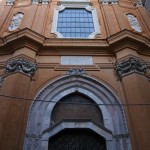 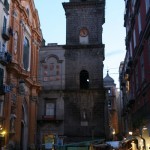 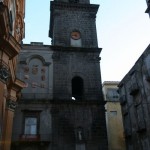