The agora, the civil heart of the Greek city, is located between the north and south sanctuaries. The buildings date back to the oldest in the 6th century BC. The Romans made the southern part of the agora the forum, leaving the rest, except to build some houses.

From the agora, near the track, remains a Heroon (around 520 BC), from which emerges a stone tile roof. Inside were found amphorae with the figure of Hercules. Because of its location and furniture, it was deduced that it was a cenotaph, an empty tomb dedicated to the worship of the founding hero of the city.

Further east the Ekklesiasterion (circa 470 BC) was another key monument of the agora. It is a circular building with concentric bleachers cut into the rock and covered with blocks. It was used for the vote of the magistrates, and could accommodate between 1100 and 1700 people. 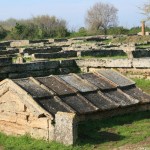 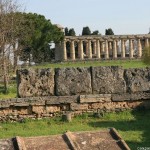 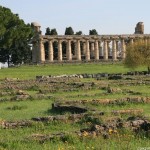