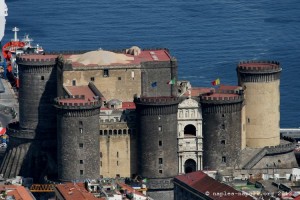 The castle was called New to distinguish it from those that already existed: the Egg Castle and the Capuano one. Its construction dates from the end of the 13th century (around 1279), during the time of the Angevin domination of the city.

Charles of Anjou came to settle in Naples was not satisfied by the royal residence of Capuano Castle, although embellished by Frederick II.
He decided in 1266 to build a fortified palace, preferably near the sea. He chose an area outside the walls, known at that time as the Campus Oppidi, where in the center stood a Franciscan church. The temple was demolished and rebuilt elsewhere.

A century and a half later it was almost entirely rebuilt by the Aragonese, who in the meantime had replaced the Angevins in the Kingdom of Naples.

The new construction is a singular testimony to the transition from medieval Gothic style to Renaissance culture, characterized by the five cylindrical towers and the Arch of Triumph of Alfonso of Aragon.

In addition to being the defensive heart of the city, the castle also served as a royal residence for nearly a century.
Its name, “Man of Anjou” (Maschio Angioino in Italian), which is attributed to it improperly, dates back to the end of the 19th century when 500-year-old fortifications built around the old center were demolished.

History of New-Castle of Naples

The construction of the New Castle, which extended from 1279 to 1282, was entrusted to the French architects Pierre de Chaulnes and Pierre d’Angicourt.

With a particularly Gothic style, its plan was an irregular quadrilateral with four defensive towers, high walls pierced by loopholes, a deep moat completely surrounding it, and a large entrance gate accessible by a drawbridge.
However, Charles d’Anjou never stayed there and settled his son Charles II, who ordered major expansion.

Other embellishments were executed by Robert of Anjou said the Wise, who even employed Giotto, having worked in Naples from 1328 to 1333, to paint the fresco of the Palatine Chapel with Scenes of the New and the Old Testament. These works have disappeared, perhaps destroyed during one of the innumerable earthquakes.

Robert d’Anjou loved to surround himself with artists and men of letters. Among the other artists who stayed at the court of Naples, figure Boccaccio.

During the Angevin period, one of the most remarkable events of medieval history took place between the walls of the New castle: the “great refusal” of Celestin V, the December 13, 1294.
In the same room, the new conclave elected Cardinal Benoit Caetani who, with the name of Bonifacio VIII, greatly missed the old hermit Celestin.

After the death of Robert the Wise, the castle was inhabited by Joan of Anjou, described as a frivolous woman who did not hesitate to sponsor the assassination of Andre d’Anjou, her husband, brother of the King of Hungary.
The second queen named Jeanne, sister of King Ladislas, who was enthroned in 1414, also retained a reputation as a woman of rather libertine morals. Legend has it that she had all her lovers killed to prevent them from going around talking about her.

By “luck” in 1442 the crown of Naples was taken by Alfonso of Aragon said the Magnanimous.
The famous Pontaniana Academy was built, bringing together the best talents available in southern Italy.
Alfonso of Aragon ordered a radical restructuring of his residence to Aragonese architect Guglielmo Sagrera. He gave the building the shape it now recognizes, almost entirely preserved.

Still today, we can admire the major hall, an architectural wonder, about thirty meters high. This room is called “Barons” because in 1486 Ferdinand of Aragon, son of Alphonse, meets all the barons of the kingdom to stop them all, these ones conspiring against the crown.

Alphonse also erected the magnificent triumphal arch at the entrance of the castle, recognized as one of the most beautiful works of the Italian Renaissance. His architect remains uncertain.

During the events of war that saw the French fighting with the Spanish, the castle was several times looted and deprived of all its wealth. For more than two centuries the atmosphere was sinister, and it was only in 1734, with the support of Charles of Bourbon, that he regained a certain dignity.

An event worth mentioning occurred in 1799, when the French proclaimed the constitution of the Partenopea Republic of Naples.

Naturally, like any self-respecting castle, the New Castle has vast undergrounds and jails; there is also a cell called “Cell Crocodile” because according to the legend, a crocodile fed enemies of the crown and unlucky lovers of the Queen Jeanne. 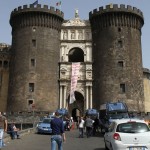 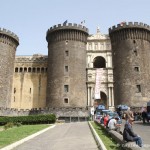 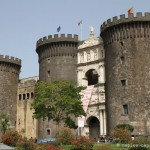 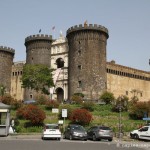 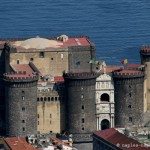 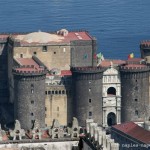 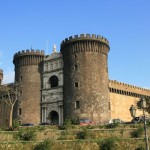 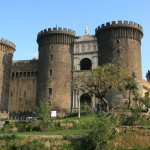 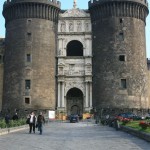 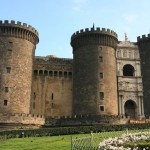 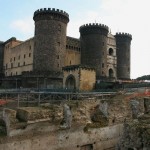 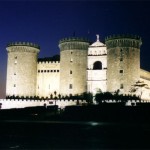 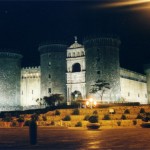 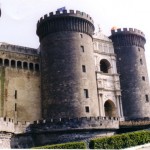 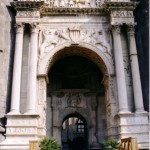 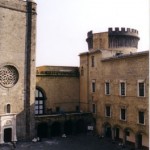 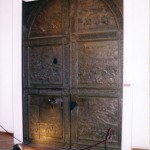 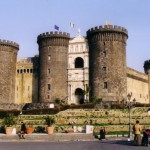 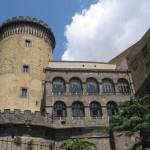