In 476, Romulus Augustus, the last of the Roman emperors, was deposed and imprisoned near the Castel dell ‘Ovo (castle of the egg) which at that time was a fortified Roman villa.

Many Roman emperors – Claudius, Tiberius, Nero – spent their holidays in Naples in elegant villas, of which only ruins remain today.

Among the Roman constructions there was an odeon and a theater, as well as the temple of Dioscuri, the god of the city.

Although conquered by the Romans in the 4th century BC, Naples has long maintained its Greek culture.
During the Roman era the city was a place where Hellenistic culture flourished, attracting many Romans curious about Greek culture.
Naples was famous for its pleasant climate, sung by the poems of Virgil. Luxurious villas stretched all along the coast, from the Gulf of Pozzuoli to the Sorrentine Peninsula.

The Romans connected the city to the rest of Italy thanks to their famous ways, they dug tunnels to connect Naples to Pozzuoli, enlarged the harbor, baths and public aqueducts.
In fact, the quality of life in Naples has increased considerably. In addition, the culinary preparations already had good reputation.
The testimonies of that time truly describe Naples as a city of pleasure.

According to the legend, Peter and Paul themselves came to preach in the city.
Christian influence began in the last years of the Roman Empire. Some catacombs were dug in the north of Naples. 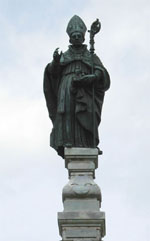 The first Paleo-Christian basilicas were built near the entrances to the catacombs. The city’s most popular saint patron, San Gennaro, was beheaded there in 305, and since the 5th century it has been commemorated in San Gennaro Moenia basilica.

It was in the villa of Lucullus, now the castle of the egg (Castel dell’ Ovo), that Romulus Augustus, the last Roman emperor of the West, was imprisoned after having been deposed in 476.

In the sixth century, Naples suffered greatly during the barbarian invasions of wars between the Ostrogoths and the Byzantines.