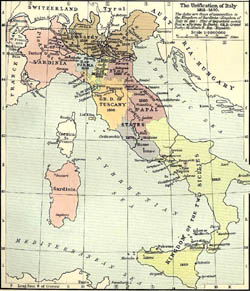 In 1839, Naples was the first city in Italy to have a railway, with the line Napoli-Portici. Despite a small cultural renaissance and the proclamation of a constitution on June 25, 1860, the last years of the kingdom sees deepen the abyss between the court and the intellectual class.

On September 6, 1861, the kingdom was conquered by the partisans of Garibaldi and was handed over to the king of Sardinia: Garibaldi entered the city by railroad, descending to the square that still today celebrates its name. In October 1860 a plebiscite sanctioned the end of the kingdom of Sicily and the birth of the state of Italy, despite a war of resistance of the Neapolitans who lasted about a decade of resistance and brigandage.

Sicily and Naples contributed to the new treasure of the state with 443 million lire, while all the other states gave only 224 million.

The opening of the railway and the funicular to Mount Vesuvius was the occasion of the writing of the famous song Funiculì Funiculà, one of the greatest song among the centuries of tradition of the Neapolitan song.
Many Neapolitan songs are also famous outside of Italy, for example “O’s unique millions”, “Santa Lucia” and “Torna a Surriento”. On April 7, 1906 the neighbor Vesuvius broke out, devastating Boscotrecase and seriously damaging Ottaviano.

In 1944 activity resumed with a spectacular and devastating eruption; images of this eruption were used in the movie “War of the Worlds”.

Losing the rank of capital, the city remained in any case the most important political, economic and social center of southern Italy.
Over the years, Naples began to have an important role even strategically and militarily: becoming the port from which the expeditions for overseas colonies (Libya, Eritrea, Somalia, Dodecaneso and then Ethiopia) left, and becomes one of the most important ports of the Mediterranean.

Hit hard, like the other Italian cities, during the post-war economic crisis (The first world war), Naples rose slightly during the Fascist dictatorship, but this ephemeral illusion collapsed at the entrance to Italy Fascist war, alongside of Germany and Japan.
Half destroyed by the British bombing between 40 and 41 (which had a formidable strategic base in Malta), American bombing between 42 and 43 (on the eve of the landing of Lampedusa) and finally by those Germans in 43 and 45 (after the King’s Treaty of September 8, who signed the surrender to the Anglo-Americans and then fled), Naples was the first Italian city to rise up against the Nazi military occupation: in four days (September 28 – October 1, 1943) the crowd rose up against the Germans, and when a few days later the Anglo-Americans arrived in the city, they found it already free, and pursued towards Rome.
At the end of the war, when it came to voting the passage from the Monarchy (now in the collective imagination the symbol of Fascism) to the Republic, Naples was in favor of the first, not because still linked to fascism, but because a large part of the population was of poor class, and easily conditioned by propaganda.

The fact is, that the Republic defeated, and without any manifestation of disagreement, many Neapolitans like Enrico De Nicola, supported it, this one was even elected first president of the Republic.

After the Second World War, Naples, like many other Italian cities, had an economic boom: building industry, health, education, work.
All brought Naples back to be the third Italian city after Rome and Milan, but ahead of Turin, Genoa and Venice.
The boom quickly died out, however, because of the corruption of the new republican governments, but mainly because of the Camorra, which had regained control of the city for 4 days, blocking every free and civil development of the city .
“Outside” political games Palace, which stopped punctually in Rome, Naples felt less and less fear during the period of the “strategy of terror”, which terrorized the center north of the country.

During the earthquake of the 1980s, which destroyed almost the entire Irpinia, Naples suffered refugee reflux, complicating the already precarious demographic and urban situation of the city, crowded and strangled by narrow, unhealthy roads, old and maladjusted. unsuitable, but almost protected from destructions since stayed such.

Organized crime is deeply rooted in Naples. The Camorra, the Neapolitan gangs and families, have a long history and are now more dangerous in Italy than the Sicilian Mafia. In 2004, more than 120 people died in Naples in the massacres of the Camorra, many of the deaths related to drug trafficking.

In recent years the city has been able to react to the indifference of central governments, which have slowly abandoned the south to its destiny, the embrace of the Camorra, the lack of even the most simple rights, relying only on it same, but there is no doubt that the problems are numerous and that they can not disappear from one day to the next.

In 2004, Naples was to receive the sailing competition of the America’s Cup, but the problems were such that the organizers made sure that the competition was moved to Valencia.