Shortly after his accession to the throne of Naples in 1734, Charles III undertook archaeological excavations in Herculaneum.
For various reasons, including the threat of Vesuvius presence on the Villa dei Portici, which sheltered the discoveries of Herculaneum, it was decided to create a museum.

Charles III was also inheritor by his mother Elisabeth Farnese of the property of the Farnese House of Rome and Parma, which included exceptional collections of paintings and antiquities.

It was from 1777, at the Palazzo degli Studi (dating from the end of the sixteenth century to accommodate first a barracks cavalry, and then the University of Naples) that were undertaken work to consolidate the collections, the School of Fine Arts and a library.

Despite the protests of the Pope, Ferdinand IV transferred from Rome to Naples the Farnese collections.
After the Napoleonic occupation and the reign of Murat, Ferdinand IV regained the throne of Naples (under the name of Ferdinand I King of the Two Sicilies) and inaugurated the new museum on February 22, 1816, called Real Museo Borbonico.

During the 19th century, the museum was enriched with other private collections, including those of Caroline Murat and the library of Count Eduardo Lucchesi Palli. In 1860, it became the property of the state as “National Museum of Naples”. During the 20th century, its library was transferred to the Royal Palace and its Pinacoteca at the Capodimonte Palace. The National Archaeological Museum of Naples is now entirely devoted to archeology. 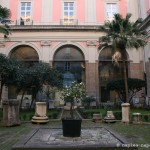 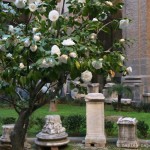 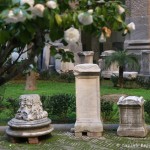