Other monuments and sites of Benevento 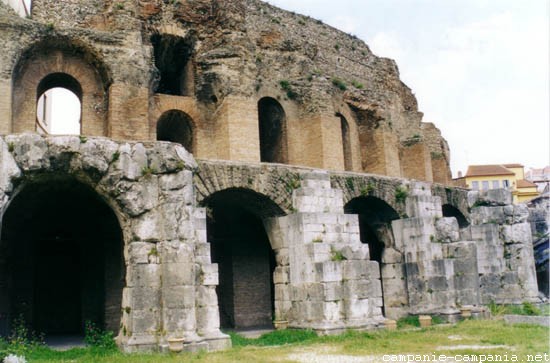 The Roman theater of Benevento was built in the second century of our era, at the time of the emperor Hadrian. It is located in the middle of the medieval Longobard quarter of Triggio.
Semi-circular, this vast theater with a diameter of 90 meters could accommodate 15,000 people.
The exterior had 25 arches on three levels, there remain mostly those of the first level.
Under the longobards, it was abandoned, partially buried, it served as a foundation for houses. From the end of the 19th century, it began to be cleared and rehabilitated.

A good part of the monument is preserved, like its corridors and its stairs.
The access path is decorated with carved masks that evoke those used by the actors.

Equipped with excellent acoustics, the theater is used for musical and cultural events, including an opera festival. 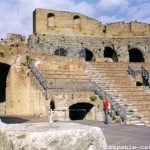 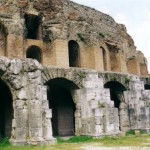 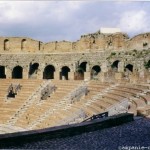 This bridge with five arches, allowed since the third century BC the Via Appia to cross the river Sabato to enter Benevento.

It has preserved its Roman structure, having been restored several times, by Septimius Severus and Caracalla.
Its name comes from the Middle Ages, where there was a leprosarium nearby.

Totila, king of the Ostrogoths, destroyed it in 545 during the sack of the city.

On the evening of 22 August 1128, Norman Count Roger II of Sicily (the future King of Sicily) forced Pope Honorius II to an agreement to invest the duchies of Puglia and Calabria.

Manfred of Sicily was killed near this bridge by Charles of Anjou at the Battle of Benevento in 1266.

In 1702, the bridge was damaged by an earthquake, the arches were rebuilt, reduced from five to four, and only one of the original pillars remains.

Recently, the bridge was closed to traffic.

Arc of the Sacrament

The Arco del Sacramento is a Roman arch, located on Via Carlo Torre, built around the beginning of the second century AD. It gave access to the south of the Roman forum. The marble that covered it is almost entirely gone. 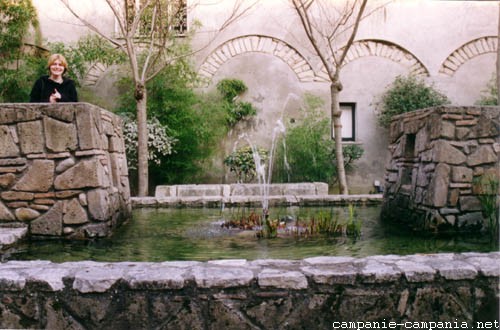 In one of the gardens of the convent of San Domenico, the Horto Conclusus was created by Domenico Paladino in 1992, a member of the Italian avant-garde, with the architects Roberto Serino and Pasquale Palmieri, and the lighting designer Filippo Cannata.

Horto Conclusus literally means “walled garden”, inspired by similar gardens evoked in Genesis and the Gospels. In the Middle Ages, hortus conclusus are secret and protected places where ascetics, isolated from the world, can come closer to God through meditation.
This is the model of monastery gardens, tetragonal, with a central tree that symbolizes life, and a well or fountain that symbolizes the source of knowledge.

Paladino wants man to be reflected in the search for harmony between nature and history. He uses and reinterprets artistic codes of the past, references to the myths and history of the Samnites and Longobards of Benevento.

Among the objects, the most intriguing is a bronze horse, standing on a wall, wearing a golden mask of Agamemnon, seeming to evoke the myth of the Trojan horse.

There is also a kind of Samnite shield, planted in the ground, which seems to have fallen from the sky and served as a fountain; several fountains.