Santa Sofia of Benevento, in the homonymous monumental complex, is inscribed on a list created in 2011 by UNESCO of seven sites of “Lombards in Italy: places of power”.
However, the building was renovated and changed appearance several times over the centuries.

The church was founded by Duke Arigis II of Benevento around 760, on the model of the chapel of Liutprand Palace in Pavia. It became the national temple of the Lombards, who took refuge in the Duchy of Benevento after the defeat against Charlemagne of King Didier in 774.

It was remodeled in the eighteenth century, taking its circular form, with the addition of two chapels, and a new Baroque facade. Most of the original frescoes disappeared except some remains.

The church is small, with a maximum circumference of 23.50 m, but has a very original configuration for the time. The central plan is based on that of Hagia Sophia of Constantinople, but with six central columns (which could come from the ancient temple of Isis), whose summits are connected by arches that support the dome.
This inner hexagon is surrounded by a decagonal ring with eight white limestone columns and two columns surrounding the entrance. Part of the outer wall is star-shaped, the part having the three apse is circular.

Originally, frescoes covered the entire interior of the church, there are fragments in the two lateral apses: the Annunciation to Zachariah, silent Zachariah, the Annunciation and the Visitation of the Virgin Mary, painted between the end of the eighth and the beginning of the ninth century.

Outside, in the bezel of the beautiful Romanesque door, there is a 13th century bas-relief from the missing porch, depicting the Christ enthroned between the Virgin, and Saint Mercury and the kneeling Abbé Gregoire. The portal is included in a larger cavity that also recalls a portal flanked by two columns supporting another arch. 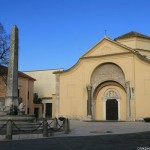 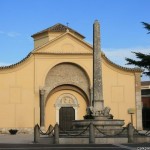 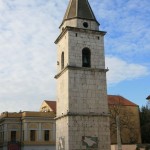 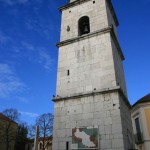 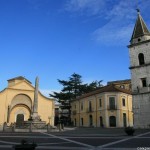 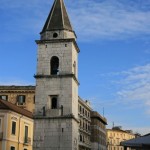