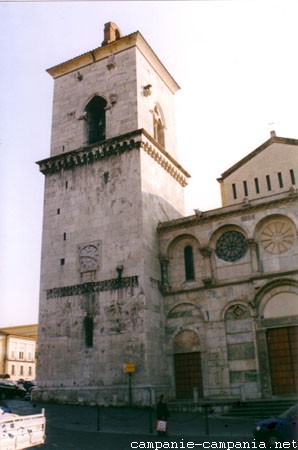 The Metropolitan Cathedral of Santa Maria de Episcopio was the first Christian church of Benevento. It was unfortunately almost completely destroyed by the Allied bombing of the Second World War, which was later rebuilt.

An important reconstruction took place in the eighth century, under Duke Arigis II.
The building has often been rebuilt, enlarged and transformed, mixing many styles and eras. With five naves, its artistic merits were rather in sculptures, bronzes, marbles and friezes of disparate periods.

The Longobard prince Sicon, around 830, enlarged the church with three naves, with columns of classical marble, long the most distinctive feature of the old cathedral, until the destruction of 1943.

Part of the facade dating from the eleventh century has nevertheless been preserved, as well as the Romanesque facade of the thirteenth in white marble and the bell tower, the crypt of the early church with remains of frescoes of the fourteenth century.
Everything else dates from the 20th century.

Inside, there is among others the large marble statue of St. Bartholomew of the early fourteenth century, which survived at the bombing.

After seven years of restoration work, the cathedral was reopened in 2012. 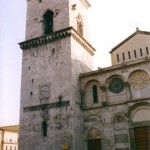 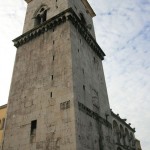 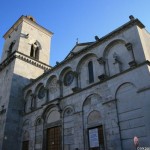 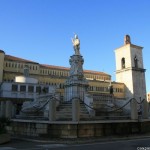 Links about the cathedral of Benevento :