In the Middle Ages, many towers were built to locate the Saracens, guilty of numerous incursions that endangered the local population.
The first tower is outside the municipality of Positano, on the locality of the Clochette Point, where ends the Amalfi Coast and begins the Sorrentine coast.

When from there the Arabs were seen, the first signal was fired, a cannon shot, and then the tam-tam moved to the second tower, then, step by step, crossed the whole Amalfi Coast. Warned in this way the inhabitants could take refuge on the heights (for example in the forts of Montepertuso and Nocelle for the inhabitants of Positano). In fact, the Saracens, who were skilful navigators and warriors, were not at their best to penetrate the heights, from where they were easily attacked by the local population. 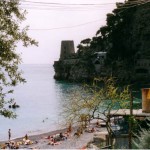 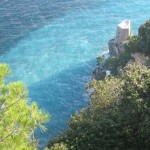