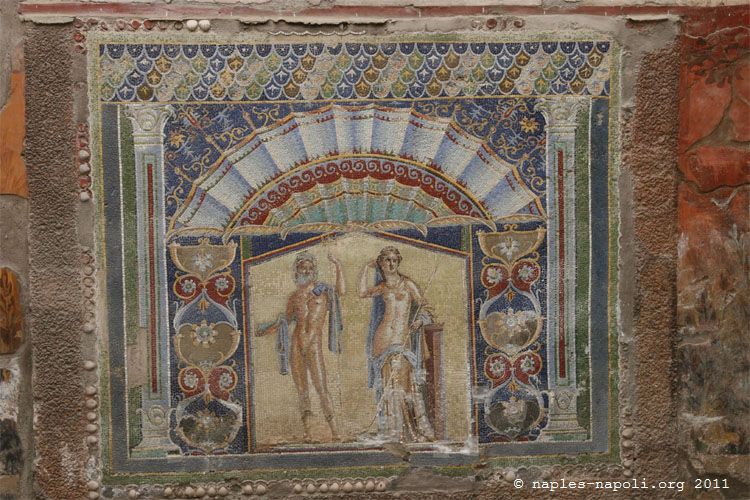 The city of Herculaneum (Ercolano in Italian), was already seriously damaged during the earthquake of the year 62 AD, and was completely destroyed by the eruption of Vesuvius in 79, as Pompeii, Stabies and Oplontis. It was covered with a considerable mass of mud, ash and other eruptive materials carried by water, which penetrated into each opening of the city, and solidified into a compact and solid layer 15 to 20 meters thick. .

These particular circumstances, of the burial of Herculaneum under this very hard volcanic gangue, have on the one hand made excavations particularly arduous and slow, they progress still today with difficulty. But on the other hand, they encouraged the preservation of perishable materials, such as wood, papyrus and even certain foods.

Thus, its conservation is much better than that of Pompeii. While in the latter, the roofs and most of the ceilings were destroyed by the eruption, many buildings of Herculaneum have kept several floors, like the house of Argus which even kept his wooden balcony.

The city was rediscovered in 1709 during the construction of a well. Although the city was small, with an estimated population of 4000 on an area of ​​12 hectares, only about 4.5 ha have been cleared. Most of the buildings remain underground, including the market and temples that are in darkness, under the buildings of the modern city of Ercolano.

Several thousand of papyri were found in a state of char that did not make it easy to decipher, being very difficult to unwind and read. In the past, opening them destroyed them entirely. Fortunately, recent wavelength spectrum imaging techniques have greatly facilitated their reading.

The excavations are far from over, especially concerning the large Roman villa, the “papyrus villa” of which only its last floor was cleared. Some researchers think the existence of a library still underground is very credible.

But currently these excavations are suspended because another problem of importance arises: all that has been cleared since the 18th century is deteriorating – like mosaics, paintings, woodwork – and the question of the preservation of what has been day has become crucial.

Since 1997, the site is classified by Unesco, with the ruins of Pompeii and Oplontis. Since 2001, the Herculaneum Conservation Project (www.herculaneum.org) has brought together the Italian Superintendency and the Packard Humanities Institute, an American philanthropic foundation, whose goal is conservation as well as scientific research.

To see elsewhere on the internet :