The village of Amalfi 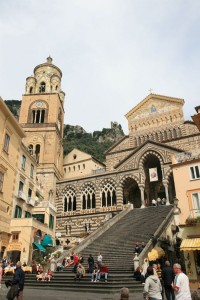 Amalfi is a municipality of about 5,500 inhabitants of the province of Salerno, south of Naples.

It gave its name next to its peninsula, the Amalfi Coast, which is mainly formed of rocky cliffs. It is one of the most beautiful destinations in the region.

Installed between the bottom of a gorge and its port, it is dominated by Mount Cerreto, 1315 m high which it covers part of the walls.
Amalfi has become a tourist destination, thanks to the beauty of the natural site, the maze of medieval streets and the particular mix of cultural influences from all over the Mediterranean. For all these aspects, it has been a UNESCO World Heritage Site since 1997.

The foundation of the city goes back to the Romans. In the ninth century, it became one of the Maritime Republics, competing with Pisa, Venice and Genoa for control of the Mediterranean. Its sailors, the first in the West to use the compass, made the fortune of the city. They developed the Amalfi Maritime Code, one of the first of its kind. Its merchants already used a gold coin in the ninth century, so most of Italy was still in a barter economy.

Established in Jerusalem, they are at the origin of the founding of the Order of Malta.

The Norman conquest, then the looting of Pisa and a tidal wave put an end to its prosperity.

The main monument of Amalfi is its beautiful cathedral (Duomo) of Romanesque and neo-Gothic style, dedicated to Saint Andrew, protector of the city. Its construction began at the end of the tenth century. It stands out with its imposing facade, its bronze portals made in 1066 in Constantinople, its beautiful Cloister of Paradise and its grand stoop.

Amalfi is also known for its production of quality lemons, from which limoncello, a digestive liqueur, and its handmade paper.

Each year a crew of Amalfi sailors participate in the traditional regatta of the Maritime Republics which oppose its counterparts: Venice, Pisa and Genoa.